Reasons To Be Cheerful (Pt.3)

Right then, this a double-bill of BS to deal with seeing as how I was a tad too tired to write yesterday. So Tuesday's stage of 85 miles and 15000' of climbing was always going to be the worst of the lot. As it turned-out it was a 'Ronseal' stage and then some. 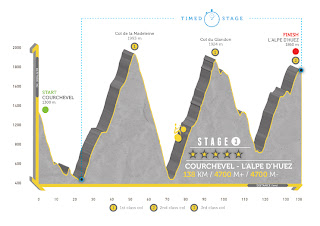 I was absolutely toast by the second summit (pictured above)  and really couldn't see how I was going to make it any further. Went and ploughed on down the descent anyway and onwards to the final interminable climb which merged eventually into the famous road up to L'Alpe d'Huez and our hotel.

It was a horrible trudge, stopping every 5 minutes for a breather and I saw a few folk pack it in (around 50 did today). By this stage there is a lot of standing out of the saddle, mainly beacuse I have a baboon's arse!

Time rolled by and eventually I saw an official timer's car behind me with about 10 uphill miles left. I expected the tap on the shoulder and for them to say 'enough' albeit in a French accent and to be honest I half-hoped that they would, but to my utter amazement the guys said that I could do it and indeed had to carry on, as I'd be letting both them and myself down if I did the 'sensible thing' and quit in order to save myself for the coming days.

All this despite being way outside the cut-off time and giving themselves an extra hour out on the course shepherding me in. Kudos to them forever for that.

I was joined by the very last rider out on the course and we followed each other up the last 6 hairpins to d'Huez with a car behind and motorbike in front. When we entered the resort I was knocked-out by the people cheering and shouting for us and the din of cars and bikes blaring their horns. Not ashamed to say that I just about cried. Big girl!


Never had such a daft day in a long time, on or off a bike. Wow!


Today was a 16km time trial from Bourg D'Oisans up the 21 hairpin bends to L'Alpe d'Huez...the record is around 37 minutes. I was hoping for anything under 2 hours! It was a spectacle at the start-line alright, although Team Lanterne Rouge took it all in their stride... 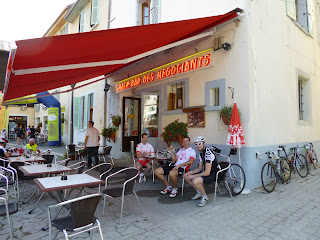 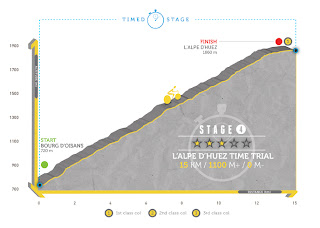 Circus or not, it was a pretty special event- how often do you get to pretend to be a real cyclist? No, don't answer...

And here I am about to launch rather unconvingly off the start-ramp...cheers Andy for filming. I think!


The weather was flawless again and I took things steady (slowly)...indeed I only passed one other cyclist and he wasn't even in our race, hah-hah! Thanks to F. Boyle for the gag below...


I felt alright until the end and I gave it a showboat-ish finish to bag a time of 1 hr and 33 mins, and then almost collapsed. I parked my bike with a ton of others and got some water and stretched and cheered other folk home.

Andy was thundering up the home straight and after he crossed the line he asked where my bike was so he could lean his against it...and that was when I realised it was gone. In the space of ten minutes. We searched all round and hoped that someone had taken the 'wrong' bike (unlikely) but again, no joy.

To cut a long and f**king annoying story slightly shorter, it ruined a decent 'rest' day not only for me but for Andy too, as he was a stand-up guy throughout. Cheers for that.
With the help of Haute Raute staff I filed a report at the cop shop and then set about trying to find a replacement bike. A cycle hire shop was selling off some ex-rental machines so I eventually settled on one although it was a wee bit small but the price was about right at E520. Between a rock and a hard place etc...

The pleasing thing out of this nonsense was the offer of a loan bike from a couple of fellow riders (one of which was the bamboo bike pictured above): for various reasons they weren't a go-er but it was nice to see the offer of help and sympathy anyway.

So, as excuses go for not getting this blog out sooner, I hope you see that this is a pretty good one. Next stop Risoul: I hope my new-ish wheels get me there. Cheers!

The story so far